Internet memes come and go. We don’t usually blog about them unless we see a relevance for your business. So why are we telling you about Ann Curry’s #26actsofkindness meme that’s taking off on Twitter? Simply because we like it. In the wake of the horrific murders in Newtown, CT, NBC journalist Ann Curry asked herself the question: “what can I do to feel better?” Maybe it’s a silly question. Maybe the right answer is that we should all feel awful for as long as it takes to feel better. Ann recalls some reporting she did from Darfur, where she saw unspeakable suffering and tragedy. She walked out of a hospital overwhelmed with sorrow for what she’d seen. She grabbed a Polaroid camera, went back to the mothers holding children and started taking photos of their children. She realized most of them had never had a picture of their child. To see their faces light up as they saw the images of their precious babies on film – well, it lightened her load for a moment.

So she had the idea to perform an act of kindness for each of the victims of the Sandy Hooks shooting. She tweeted her idea out and people all over the country have taken up the charge. Folks are buying coffees and doughnuts, leaving notes for strangers, babysitting for friends, etc. Some people are then tweeting out their acts using the hashtag #26Acts or #26ActsofKindness. 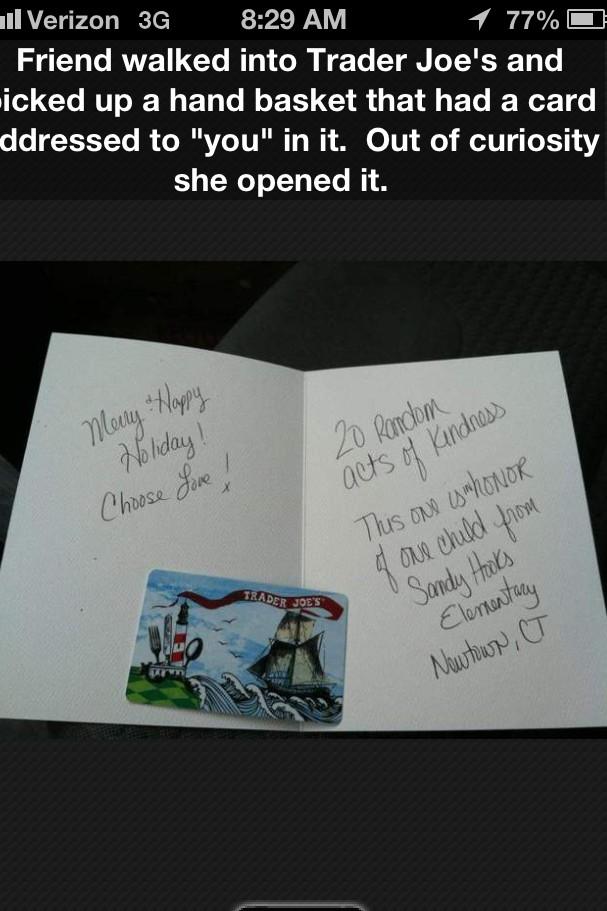 As a business, it’s useful to know what your customers are into and right now, this is catching on quickly. People have reported finding random acts in the shelves at the grocery store or in their cart at Trader Joe’s. Your customers might be participating or on the receiving end! If you’re looking to participate, and are struggling to come up with 26 ideas, the Today Show has posted some here.

Finally, a word about posting what you did on Twitter. Shouldn’t we just perform our acts and keep them to ourselves? I mean, leave a note for the person that you’re participating in this so they might pay it forward but is there a need to post to Twitter? I think for some of us who are, ahem, “older,” publishing our actions is unseemly, unnatural. So fine, do the deed, but don’t tweet about it. For other folks, they see that publishing this helps spread the idea. It’s less about bragging and more about holding themselves accountable to doing it and encouraging others to participate as well.